Lewis chessmen are some of the most sought after objects in the British Museum's collection. Many museums request them for a loan to show their exhibition. If you have ever wanted to own a piece of Isle of Lewis chess set, but weren't sure which one, then you are at the right place.

The good news is, we have three sets of pieces from Isle of Lewis chess set that have been reproduced from the original chess set.

But that’s not all.

We also have a buying guide that shows you the rich history of lewis chess set from where they have been found to their exact appearance and design. Before we explore the buying guide, which consists of chess history, let's look at the three chess sets.

What separates the Isle of Lewis chess set from the rest is originality. There's no misrepresentation or modification, and all the historical aspects match the original pieces.

That said if you aim to buy the exact copy without any historical loss. Then this Isle of Lewis Chess set is for you. You'll enjoy the famous chess game while you reflect on the rich history of chess.

The chessmen and Chessboard have a long-lasting, durable material to allow you to play the chess game for a lifetime. Its chess pieces come from cast materials having an antiqued finish that resembles the ancient style.

The modeling of the pieces features a humanoid figure that represents the sets. The Isle of Lewis chess set comes with two options for purchase. You can either buy the chess pieces alone or buy them with a matching chessboard and chess box.

If you are a player who loves and appreciate authenticity, there's a replica of Isle of Lewis chess set. Most of its pieces are from the original brown and cream colors. The beauty of having a metal chess set is because of its durability and luxury.

Its chessboard size is 2.25 inches, the king size is 3.5 inches, and the King's diameter base is 4.4cm. This is an exact dimension of the original chess set. The board also comes with 32 chess pieces in total. 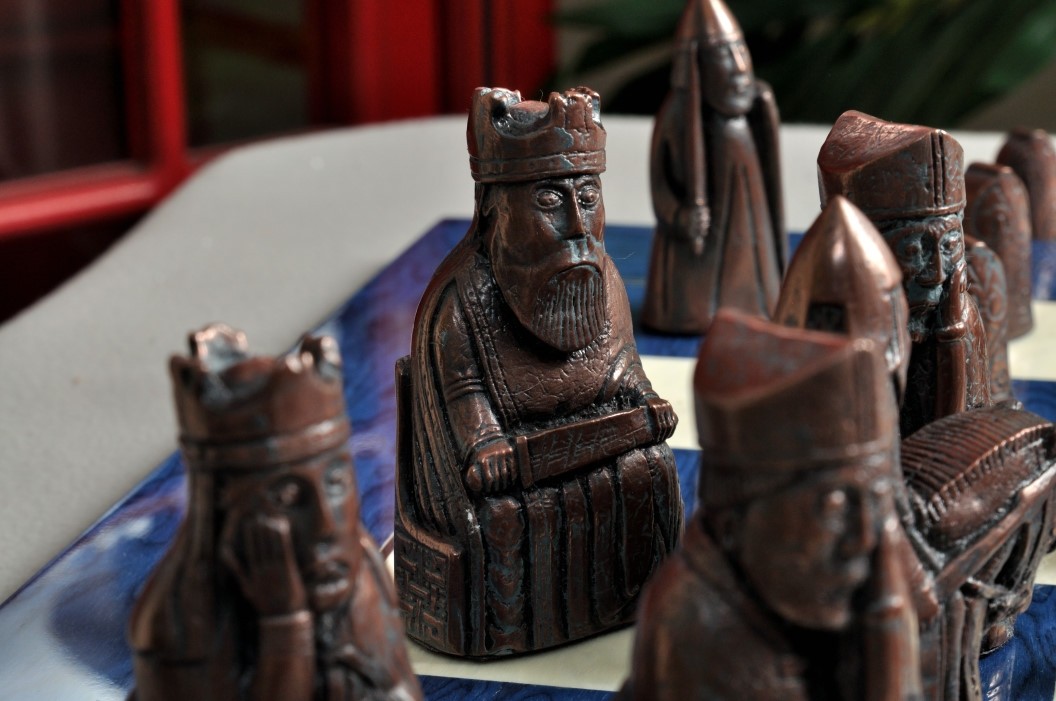 The chessboard is a beautiful polished finish featuring a grand solid walnut and maple board having a raised frame border. That means the chess set was built to last.

Its pieces resemble the ancient art, which gives it a distinctive and majestic look. That's why it is a reproduction of its original collection of ancient Norse Chess Pieces. 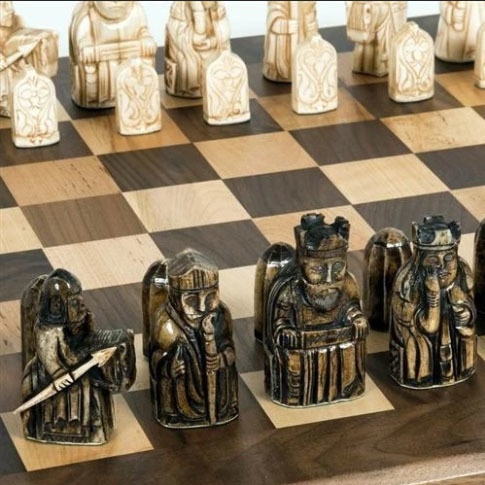 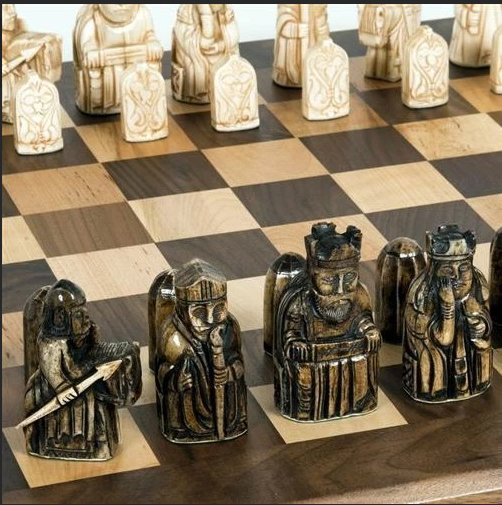 This is a stylish santos palisander and maple veneered chess set originating from Spain. Craftsmen at Berkeley Chess wanted to have a correct representation of the Isle of lewis chessmen sculptures.

The chessboard is a matte finish featuring palisander wood sculptures. That explains why it is a lovely pair with rosewood. Its playing surface has a high-quality veneer to protect the wood and solidify the matte finish.

The price isn't as high as the other sets here, but it's still not a cheap chess set by any means. 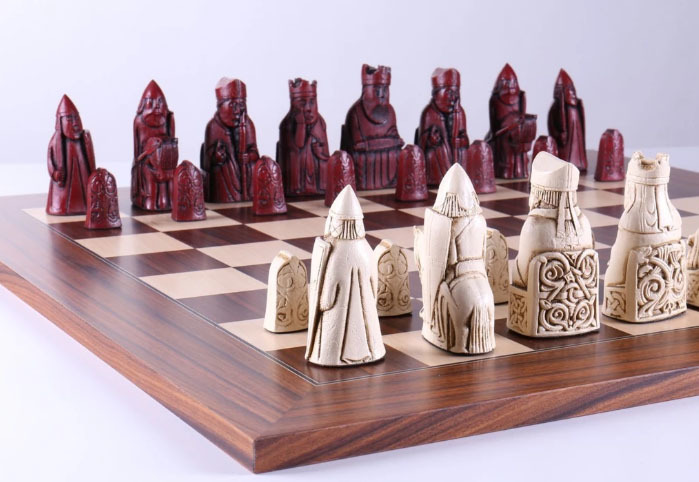 Cardinal Red Isle of Lewis Pieces on Palisander Board

1) ​History of the Original Isle of Lewis Chess Set

The Isle of Lewis chess set is believed to have been made in Trondheim, Norway about AD 1150-1200. During this period, the western isle, the place where these pieces were found was part of Norway, not Scotland.

Those pieces were buried to keep them safe on the way to Ireland to be traded. Those pieces have a strong cultural and political connection between the Kingdom of the British Isles and Scandinavia. They were critical clues for that.

First, In Trondheim, a broken queen was found during excavating. Those pieces might have been broken when it was made. Second, the carving of similar styles was also found in the Nidans Cathedral and some in Norwegian shields.

The hoards consist of chess pieces made from Walrus Ivory and whale's teeth. Those pieces were in the form of seated kings and queens, bishops, knights on their mounts, standing wanders, and paws.

The chessmen represented the social hierarchy and conveyed the status of those represented. ​

There's a huge possibility the chess set belonged to a business merchant who was traveling from Norway to Ireland. That's because they were so many pieces found along the way.

The Isle of Lewis chess set is made from walrus ivory.  The northern Europe walrus ivory for luxury carvings. They used narrow tusk to make gaming pieces. When you view those pieces, their appearance looks strange and comical.

For instance, the queens appear to be resting in sorrowful states with their hands on their face. Rook casts have a sidelong glance with bulging eyes. Historians argue that their appearance wasn't meant to be funny. They were a sign of strength, ferocity, and pensive wisdom.

On 11 April 1831, Ryric exhibited Lewis chess set on the  Society of Antiquaries of Scotland. Charles Kirkpatrick Sharpe purchased 10, and other chessmen were sold on behalf of the British Museum. Kirkpatrick later added a bishop to his collection and then sold all his pieces to  Lord Londesborough.

The same pieces belong to Charles Kirkpatrick Sharpe were later sold to the Society of Antiques of Scotland. The Society then decided to donate the pieces to the Royal Scottish Museum in Edinburgh. You can always find those pieces in the National Museum of Scotland.