Francois Philidor realized this and gained popularity by winning blindfold chess matches. Later, British and French newspaper reports gave authentic, yet biased accounts of his achievements, giving a cold shoulder to the fact, that much earlier Arabian, Persian, Greek, Italian, and Spanish players had equaled his performances about ten centuries ago.

These commemorations are made in History of Chess book by H.J.R. Murray. According to the author, the historical recounts are neither certain nor reliable; however, there are a good number of references that in the 10th century Arabians used actual blindfolds, allowing the player to touch the pieces in front of him. In 14th century the practice of blindfold chess was widespread in the Arabic world.

As-Safadi remembered having seen Ala’addin, who was blind, play chess with the nobility in Egypt and “beat them utterly” (Murray, page 204). Ala’addin was said to be a soldier, which suggests that he was not born blind but may have lost his sight in battle. He may have been a good player before that, and one wonders whether he was allowed to touch the pieces, as other truly blind players of many eras, including today, have been permitted to do.

As-Safadi also recalled seeing a blindfold player called an-Nizam al-‘Ajami in Damascus in 1331. He said, according to Murray:

The first time that I saw him playing chess, he was playing with the Shaikh Aminaddin Sulaiman, chief of the physicians, and he defeated him blindfold. We indeed knew nothing until he gave him checkmate with a Fil [an elephant, whose modern counterpart is the bishop], and we did not see that it was mate until he turned to us and said, “It is checkmate.” I have also been told that he sometimes played two games at once blindfold. The sahib al-Maula Badraddin Hasan bin’Ali al-Ghazzi told me that he had seen him play two games blindfold and one over the board at the same time, winning all three. He also vouches for this: Shamsaddin once called to him in the middle of a game, “Enumerate all your pieces and your opponent’s”; and he rehearsed them in order at once, just as if he saw them before him [page 204].

The evolution of blindfold chess eliminated the opportunity to touch the pieces. It was necessary to devise a method by which the two players communicate their moves to each other, or have a referee transmit them.

In most medieval works a fixed system of notation was not used, and moves were indicated by reference to the position of the pieces on the board. Typically, moves were described in sentences: for example, a piece was said to have moved “next to” another piece.

The modern move description of White’s move Nf3 (or Ng1–f3) would at one time have been recorded as:

The white King commands his owne knight into the third house before His owne Bishop.

That would hardly be a suitable notation system in today’s computer society, and it would certainly make blindfold chess a slow and cumbersome process.

It was not until the eighteenth century, starting with the 1737 publication of a book of problems by the Syrian-born Philip Stamma, that the basis of the modern algebraic system of notation was introduced. Therefore, it is worthy to note that thanks to the practice of blindfold chess we have a flexible way to describe chess moves. 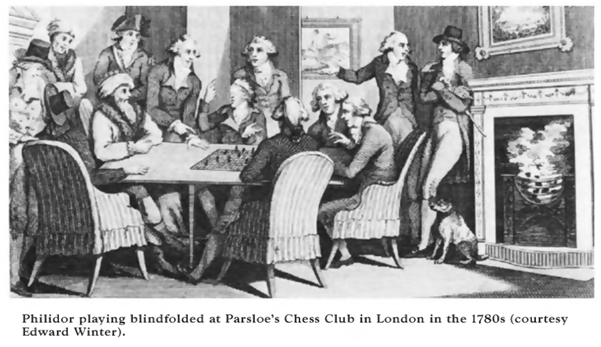 In one famous blindfold game Blackburne astonished those present by announcing mate in 16 moves—surely the longest announcement of mate in the entire history of blindfold chess. This bit of drama would be quite unusual even in a regular game.

We have not been able to discover the number of boards Blackburne was playing simultaneously, the location and date of the game, or the game score. It is merely diagrammed as below in Blackburne (1899/1979, page 211). 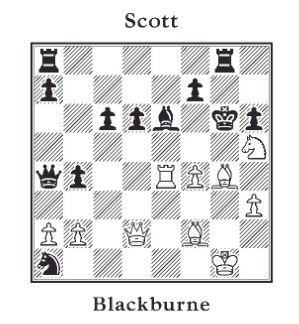 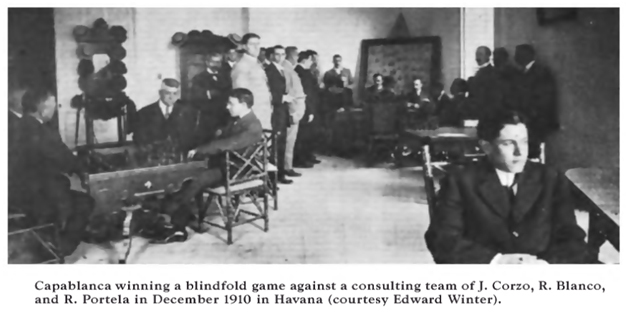 An interesting fact is that simultaneous blindfold chess events were banned in the USSR for some period as they were deemed to be a health hazard. Michael Botvinnik also warned against it.

Out of the USSR, however, this application of chess was skyrocketing. George Koltanowski set the world's blindfold record on 1937 winning 24 games and losing 10, over a period of 13 hours. The record was included in the Guinness Book of Records and is generally accepted as the world record to this day.

Later Miguel Najdorf claimed to have broken that record, but his efforts were not properly monitored the way that Koltanowski's was. Najdorf's first record was against 40 opponents (+36 =1 -3) and was organized in an effort to gain sufficient publicity to communicate to his family that he was still alive, as he had remained in Argentina after travelling from his native Poland to compete in the 1939 Chess Olympiad.

He increased this record to 45 opponents in 1947, with the result of 39 wins, four draws and two losses.However, he had access to the scoresheets, and there were multiple opponents per board. Koltanowski claimed that he could have managed 100 games under those conditions.There have been no serious attempts to increase the record since then, due to lack of interest in mere numbers.

The unprecedented growth of the heat-map of blindfold chess set up a necessity to organize official chess tournaments.  In 1992, FIDE organized the premier tournament of Amber in Roquebrune, France.

Named after his daughter, the tournament was usually held in March. Her sister was the eponym to the Crystal Kelly Cup. Nevertheless, it was in 1993 when FIDE added blindfold chess to the program of the tournament that lasted until 2011 and had Levon Aronian as the last grandmaster to win the Amber blindfold chess competition.

During its 20 years spell Amber gained popularity due to its unique way of deciding the winner by combining their rapid chess and blindfold chess results. The most successful player in Amber’s history was Vladimir Kramnik(6).

From 7th century to today, the execution of blindfold chess has evolved and come to a place, where we use computers to play the game. We are never going to know where blindfold chess will reach, but we know one thing for sure: it has always been and will be one of the most entertaining and witty types of chess.