There is a common misunderstanding that cheating in chess emerged years after chess engines were widely available for simple users. In fact, it dates back to 1770 when Hungarian author and inventor Wolfgang von Kempelen created a fake chess-playing machine called the Turk.

The automaton was called so because of the world-renowned leverage that Turkish chess players held at the time. The Turk was a mechanical illusion that allowed a human chess master hiding inside to operate the machine.

With a skilled operator, it won most of the games played during its demonstrations around Europe and the Americas for nearly 84 years, playing and defeating many challengers including statesmen such as Napoleon Bonaparte and Benjamin Franklin. 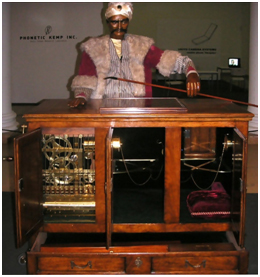 Spotting the cheaters in the game is not a piece of cake. I remember a story from my playing years when a chess player was busted because he went to the bathroom with his phone in the right pocket and came back having his phone in his left one.

Turk has not been busted this easy. It was not until 1975 when people realized that Turk was a purported chess-playing automaton. In his book The Great Chess Automaton, Charles Michael Carroll studied the machine in an unprecedented attitude, delving into the depth of the details and trying to debunk all the mysteries about who sat inside it.

Five years later, Bradley Ewart discussed the Turk and other automatons in his book Chess: Man vs. Machine, proving that the machine had the capability to host a chess master inside it and create the illusion that a machine is making the moves.

All in all, the Turk left a gigantic legacy on its trail, starting a whole new aspect in chess that has evolved since its creation and turned into the worst crime anyone can do toward chess.

The modification of chess engines and the shrinking of mobile devices provided chess players with theoretical opportunity to cheat during chess games. It would not be a hard guess to say that the overwhelming majority of cheaters execute their plan in the bathroom.

Indeed, any battle-scarred double-agent will never carry the device to the scene of his activity himself, much like Michael Corleone when he killed McCluskey and Sollozzo in The Godfather.

That is why the first and in many prominent chess player’s opinions the most light-shedding cheating accusation is called bathroom controversy. During World Chess Championship 2006 match between Vladimir Kramnik and VeselinTopalov, the latter accused the former of cheating during the game.

Topalov’s manager Silvio Danailov explained their actions by pointing out that Kramnik has spent an unreasonable amount of time in the bathroom, which can be deemed as an attempt to violate the rules of fair play and utilize forbidden strings in order to gain an advantage over Veselin.

After these accusations Kramnik forfeited the 5th game, which was the first world chess championship match since 1972 Spassky-Fischer in which a game was forfeited. Game 6 was due to be played on September 30, but was postponed until October 2 by the decision of the FIDE president. On September 30 and October 1 negotiations over match continuation between players, their teams, and FIDE took place instead.

Kramnik agreed to play Game 6 under protest, with the status of Game 5 to be resolved later. It is a well-learned fact that KirsanIlyumzhinov told Kramnik:

...I hereby inform you of my full trust in the members of the Match Appeals Committee and their latest decision taken in respect of the appeal of Topalov's team dated 28 September 2006. I am also asking you in good faith to continue your participation in this match...

For your information, the classical games tied after 12 games and Kramnik won the overall match by 8½-7½. The two chess masters held the grudge till their last individual meeting and refused to shake hands every time they played against each other.

Another incident that includes a high profile character is Kasparov’s touch move rule controversy. At Linares 1994, Polgar suffered a defeat at the hands of then-world champion. After four games 17-year-old Polgar had 2 points, which was a fair result considering that she was rated third from the last.

In the 5th round she was matched with Garry Kasparov. During the game, the World Champion changed his mind after making a move and then made another move instead. (According to chess rules, once a player has released a piece, he cannot make a different move. So, Kasparov should have been required to play his original move)

Later, Polgar mentioned that it was the first time she was invited to a major event and did not want to cause any outbreaks in the tournament. At that time she was unaware of the fact that video tapes showed that Kasparov’s fingers were free of the knight for six frames (in other words for ¼a second).

Kasparov has never admitted that he released the knight, even though it is known that Polgar approached Garry in a bar and said some words about the incident.

In Chess for Dummies, James Eade commented on the game, writing:

If even World Champions break the rules, what hope do the rest of us have?

He would send the moves by SMS to the team coach, Arnaud Hauchard, who would then stand or sit at various tables as a signal to the player, Sebastian Feller, to make a certain move. Unlike other cases, each player involved was a legitimate Grandmaster or International Master. None of the other players on the team knew of this or were involved, but those involved were banned from chess for varying amounts of durations.

Now back to Eastern Europe, where a non-titled Bulgarian chess player named BorislavIvanovwas accused of cheating by several Bulgarian chess grandmasters. More than 20 of them signed a petition against him participating in tournaments, outlining that they would refuse to join the tournaments that included Borislav.

The reason was his outstanding performance and his skyrocketing ELO. After mixed up speculations Grandmaster VeselinTopalov, ranked No. 1 in Bulgaria, stated in an interview on 21 May 2013 that there is no evidence that Ivanov is cheating, and that "it's simply stupid to blame a chess player for performing well on the board".

To be honest, this is pretty ironic. Afterward, the court acquitted all the accusations; however, in 2013 Ivanov announced about his retirement from chess: most probably a relief for everyone.

Indeed, there is a bulky mass of cheating incidents, so it can make us hungry to have a look at the reaction of FIDE encapsulated in regulations. In July 2014 FIDE released and implemented a new bundle of chess laws that included a point about mobile phones:

11.3b claims that during play, a player is forbidden to have a mobile phone and/or other electronic means of communication in the playing venue. He shall lose the game if he does. In certain circumstances, the arbiter may require the player to be searched. This is a much more stringent rule, aimed at preventing suspected cheating.

The previous 2009 version of the law stated that:

if a phone makes a sound during play, the game is lost for the player concerned.

Surprisingly, there were negative reactions to this change. Some people indicated that there might be some emergencies or where they are supposed to leave their phones if they travelled to the venue, but the stance of FIDE was clear and not subject to change.

Nonetheless, these disagreements between chess players and FIDE laws are hindering the implementation of this law that thoroughly nullifies the chances to cheat during the game.

As they say, the two most powerful warriors are patience and time, so maybe one day this law update will compel everyone to be honest and believe in themselves instead of hoping that their phone screen will bring them glory.

Another appealing reaction on the regulations made by FIDE was given by a Russian-Kazakh GM  Vladislav Tkachiev. He is an eccentric individual in the chess world with an ostentatious character. Vladislav is sure that even after all these regulations it is still an incredibly easy task to cheat during a chess game.

He spent an hour and a half researching the subject and came to a conclusion that it costs thirty bucks to rent equipment and a conspirator to send him key moves during the game. That is enough to gain an enormous advantage over someone with the same strength.

The Grandmaster decided to try this on his colleague DanillDubov and recorded the process in this video. As you can see, it works perfectly.

It turns out that ear is not the only place, where you can hide your crime device. Latvian grandmasters were fazed by the strong performance of Anna Rudof in 2008 Vandoeuvre Open in France, who was unexpectedly leading the tournament.

The disgruntled GMs accused the Hungarian phenom of cheating. In Rudolf’s case, suspicion centered on her lip balm said to be a wireless device for communicating with a remote silicon adviser.

To her chagrin, the organizers confiscated her handbag and lip balm before the key round. Her opponent refused to shake her hand before the game and told her she didn’t play fair. Her concentration was rattled and she ultimately blew the game.

It is now too common in chess for disgruntled losers to raise the specter of cheating without offering a shred of evidence. False allegations, which are maliciously made in order to hurt a player’s reputation and confidence, are as much a threat to tournament chess as are real cases of hidden microcomputers and surreptitious wireless devices.

In other words, it is cheating when you use a chess engine, or break the touch-and-play rule, but it is critical to comprehend that falsely accusing someone of cheating is not less cheating than the latter and the former.

At the end of the day, you can read, hear, and witness about millions of cheating ways in different kinds of fields. Maybe you are tempted to try out the smart methods of Vladislav Tkachiev and maybe you are not.

But before you open a new tab to search for an ultra-microphone designed for cheating during exams, ask yourself a question; if I am not going to persist under the pressure and test my knowledge, skills, and nerves then who will?