One of the best things you can do to improve your chess is to get away from the computer and start playing over the board.

At the beginning of his famous book Build Up Your Chess, Artur Yusupov (at his peak third in the world to Kasparov and Karpov), writes in bold:

You must absolutely play through all the examples and all the variations on a chessboard.

On this it seems that few would disagree.

However, in-person, over the board chess is filled with a minefield of faux pas and it can be a painful experience treading on them one by one.

Which is why we’ve put together this guide.

In it you’ll learn everything there is to know about successfully navigating the world of chess etiquette and leaving the people you meet feeling like you’re an old hand. Even if it’s your first time at a club.

TABLE OF CONTENTS
When should you resign in chess?
How do you resign in chess?
When should you offer a draw in chess?
How do you offer a draw?
If you touch it, you move it. The touch-move rule
Can you adjust the pieces?
Can you have food at the table?
Are you allowed to talk during chess?
Can you try to “trick” your opponents
How to Win & Lose at chess (properly)
When do you say check and checkmate?
Final Thoughts

When should you resign in chess?

Chess is inherently competitive and as such attracts fierce competitors.

Not the type of people to give up readily.

And yet resigning when you’re defeated is considered good etiquette.

It’s easy to see why many find this a bit tricky.

It’s a bit like real war; you don’t want to run away as soon as the fighting begins, but once you’re surrounded and outnumbered and victory seems impossible, surrender is often the smart move.

It’s no different in chess.

When you’re at a point where all the paths lead to defeat, don’t waste any more of your opponent’s time; just resign.

Being known as the guy who won’t resign won’t win you any friends and it might even lead to people not wanting to play with you anymore.

How do you resign in chess?

Once the decision to resign has been made, you need to then know how to resign properly.

The traditional method was to tip your king over and shake hands with your opponent, but that method is seen as overly formal today.

These days you can just shake hands with your opponent and congratulate them on a good game. If they’re a player of any experience whatsoever they’ll know what you’re doing.

You can also stop the clock and put your hand forward to congratulate the victor.

When you do this, it’s important to make sure that your hand isn’t dirty or wet.

Chess players can be (sometimes rightly!) finicky about this sort of breach of etiquette, so make sure you don’t make this mistake unless you’re deliberately trying to cause offence!

When should you offer a draw in chess?

If you are at a point in your game where you can’t see a possible victory for either side, you might want to offer your opponent a draw.

This is another tricky area however, because if your opponent thinks he still has a way to win then your offer will likely be rejected.

If you continue to offer a draw in the face of this then you can find yourself reported to the tournament director.

Or in a more informal setting, complained about behind your back.

How do you offer a draw?

This is another area that trips up many new players.

The correct way to offer a draw is to make your move, then make your offer before you hit your clock again.

Offering a draw on their time is seen as ungentlemanly and is not recommended if you want to be considered a respectful player.

If your opponent agrees to your offer then he’ll extend his hand and the game is over. Don’t stick your hand out in anticipation.

If you touch it, you move it. The touch-move rule

Something you don’t have to worry about in online chess is the movement of physical pieces. You can move pieces around the screen for as long as the clock allows.

In over the board chess, once you touch a piece you must move it (assuming that there’s a legal move to be made).

Once your hand comes off the piece the move is considered completed.

As you can imagine, many controversies have occurred over the years as to whether a player has touched a piece or not.

In informal settings you may be able to get away with such indiscretions (it’s not like you’re on camera at your local club), but it’s still something to be aware of if you want to be thought of as a fair and honest player.

Can you adjust the pieces?

If you need to rearrange a piece after it has been accidentally knocked over or moved, you’re able to do so.

While you do so, however, it’s polite to say “I adjust” or the French “J’Adoube”.

Can you have food at the table?

While club rules may differ, at tournaments you’re generally only allowed to have water or coffee nearby.

Don’t sit at the table munching on chips.

It should go without saying, but having messy food at the table is another huge no-no.

In his book, Chess for Dummies, author James Eades recounts a story of someone doing this to deliberately throw him off his game.

His opponent brought a submarine sandwich covered in marinara sauce to the table and when he began to arrange all the pieces before the game started, he covered the pieces in the sauce.

Eades, being a younger player at the time, let the opponent get to him but says that if the same thing happened to him again that he would simply call the referee over.

Another humorous incident happened a little more recently in a match between Magnus Carlsen and Sergey Karjakin.

You can watch what unfolded here:

It appears that before the game started, Vladimir Kramnik, who was seated at the adjacent table, shook up Carlen’s bottle of soda water. When Carlsen opened it, the contents fizzed all over himself and the table he was meant to be playing on.

While these guys might get away with this sort of thing (they all know each other very well and it this wasn’t a crucial game), it’s not recommended that you try and pull off the same stunt at your local tournament.

Your victim is unlikely to react as calmly as Carlsen does in the above video.

Are you allowed to talk during chess?

No, you are not allowed to talk during a match of chess unless it is to offer a draw, resign or adjust your pieces.

It’s considered very rude to be talking while playing so just don’t do it.

Can you try to “trick” your opponents

Because chess is a competitive endeavour, some people think that it’s ok to win at all costs.

All’s fair in love and war they argue.

But even war has a set of rules to follow.

While it may not technically be against any written rules, trying to “trick” your opponent is not considered proper chess etiquette.

Do not make a sinister laugh and rub your hands together when your opponent is about to blunder a piece.

Do not try to psych them out by making them second guess their own moves. Just sit there quietly and patiently while waiting for your opponent to make their move.

How to Win & Lose at chess (properly)

No one likes a sore loser and even fewer like a sore winner, so when you play the game make sure you’re neither.

Whether you win or lose, just shake hands and finish the game.

While it may be cool to imitate your heroes, don’t imitate Aron Nimzowitsch after a game he felt he should have won and shout:

Why must I lose to this idiot!

Do not talk about how you should have won had you only played a few moves differently.

Or that you’re sure you’d win if you got another chance to play.

By all means analyse the game, but be humble about it and accept that you were beaten.

Don’t start a game by talking about how you usually thrash players at your opponents rating.

When do you say check and checkmate?

A long time ago it was normal to say “check” every time you checked your opponent. These days it’s considered a sign of a novice player and is almost never heard at tournaments.

It’s assumed that if you’re playing serious chess that your opponent will be good enough to notice that he is in check.

The same generally goes for mate; if you’re playing someone who knows what they’re doing, they’ll see the mate arrive before it actually does and you’ll often not even need to check mate them.

But if they’re a newer player then generally shaking hands is all that’s needed. Only with complete beginners who cannot see that they are mated is it required for you to actually say the word that will end the game.

As a final exercise, let’s look at an interesting case in chess etiquette that occurred quite recently at a tournament in Bangkok, Thailand.

It’s the 2018 Bangkok Chess Club Open and GM Nigel Short has 11 year old Indian prodigy, Gukesh D, in a position where only black can win.

Then something strange happened.

Short made his move but forgot to hit his clock, then sat quietly until the clock ran down and his opponent jumped up in glee.

“Apparently my opponent kept looking both at the clock and then at the arbiter as if imploring him not to intervene. I did not notice this because, although my position was objectively winning, there were some technical difficulties and I was concentrating.

My opponent, however, most definitely was not concentrating on the board position while my time ran out. I might add that the first thing Gukesh said to me was that I forgot to press the clock.

He was fully aware of it and there was no doubt whatsoever in his mind. He immediately appealed to the arbiter to support his assertion. I will repeat that while Gukesh was within his rights to sneakily stay silent and allow me to lose on time, I am within my rights to be pretty damned annoyed”. 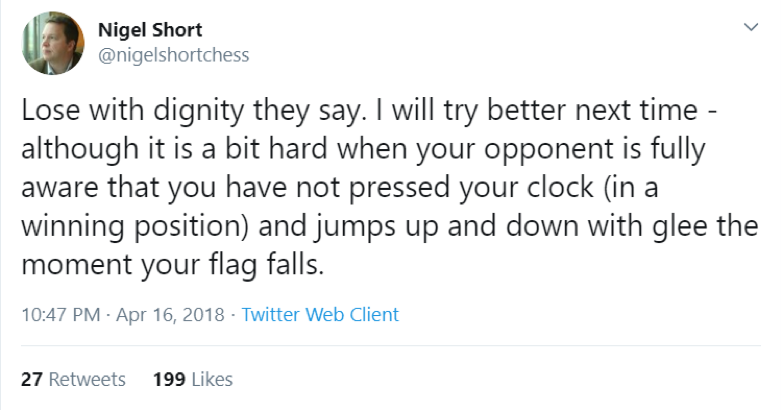 What’s the right thing to do if you find yourself in Gukesh D’s position?

Do you speak up and break protocol by talking?

Or is it the responsibility of the player to check their own clock?

Twitterers had a few different opinions:

What would you have done in this situation?

Let us know in the comments!