During the Great Migration, African-American residents began to arrive in the Northern neighborhood of New York City, called Harlem.

It goes without saying that during that period the social status-quo was rife with injustice and unreasonable discrimination, and one of them was that “the Black Kids” of Harlem cannot play decent chess.

This attitude was partly archived when the talented group of teenagers from Harlem made the front page of The New York Times treasuring the headline of “Harlem teen-agers checkmate a stereotype”.

The Raging Rooks, as was their team’s name, won the National Junior High Chess Championship by defeating the elite Dalton private school, where tuition was $12,000 per annum. The Raging Rooks were polished by Richard Gudonsky, who was a casual player.

Later, the school recruited a professional chess player who happens to be Maurice Ashley. "He was the answer to our dreams," Mr. Gudonsky said. "Besides being a great coach and player, he's an African-American, and he's just the kind of man these boys need in their lives. Watching them with him, it's like moths to a flame. He coaches them chess, and I take care of the logistics. He's the brains, and I'm the brawn."

A tiny glance to the major success of the Harlem kids compels us to take a deep thought about the titanic work that Mr. Ashley did. Every apprentice can dream about having a teacher who is capable of being more than just a teacher; perhaps, Mr. Ashley had that dream as a vehement chess beginner and that is why he has been such a diligent guide to his students.

He was born in St. Andrew, Jamaica, on March 6 in 1966. In 1978 his family decided to move to NYC for better living conditions and settled down in Brooklyn. Maurice has outlined that he discovered chess back in Jamaica, but only in high school he managed to manifest deep interest in it.

In many of his talks and interviews, Mr. Ashley recalls that he was so crazy about chess that he would play it every day after the school and sometimes just in the streets, where you had to deal with many trash-talkers.

Taking subsequent steps in the cavernous universe of chess, he spotted the racial deadlock in it and in 1991 asserted that he views the potential of becoming the first African-American Grandmaster. 8 years later Mr. Ashley reached his goal by defeating Romanian Grandmaster Adrian Negulescu.

Mr. Ashley has never stopped since the day he fulfilled his Grandmaster norm. Being a genuine connoisseur in the chess world, Mr. Ashley is a massive ambassador of chess as a sport and a good source of educating young people.

As a successful speaker he performed a TEDEdTalk that included a brief description of an alternative perspective of thinking. Mr. Ashley thinks that chess has the powerhouse to perform as a tool to help people think backwards. 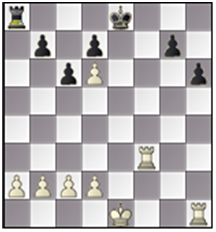 The problem requires you to mate in two. When you take a simple look at it, you will most probably think that white just castle and mate on f8 in the next move.

But it is not as simple as you might think. In reality, instead of mating in two, we have an obligation to prove that black king cannot castle and to do that we must use the technique of Retrograde Analysis.

If the rook on f3 is a promoted piece, then it is possible to prove that Black cannot castle. White, on the other hand, can castle; since it cannot be proved that it is illegal.

If the rook on f3 is not a promoted piece, then one of White's two rooks originally came from a1, in which case the white king has moved and White cannot castle; Black, on the other hand, can castle since it cannot be proved that it is illegal.

The solution is, therefore 1.O-O ("preventing" Black from castling by proving that the rook on f3 is promoted) followed by 2.Rf8#. Note that if White were to play 1.Rhf1, Black would be permitted to castle, and there would be no mate.

After solving, it looks so simple, but this is a tough way of thinking that requires a great deal of logic and flexibility.

Mr. Ashley indicates that the technique is adequate enough to have a wide range of applications and plays tiny games with the audience to prove that it is helpful in many cases.

It is incredibly aesthetic to look at the way Mr. Ashley tries to combine his chess skills with the passion of making a difference in the field of education.

To have a stroke of better luck in it he has worked as a Joint Fellow at Harvard’s Berkman Center and MIT’s Media Lab to bring the benefits of chess and other classic games to a wider educational audience through the innovative use of technology.

In another talk, Mr. Ashley meets high school football players from the chess capital of the USA which is Saint Louis, Missouri. He develops a fascinating batch of metaphors between chess and football trying to explain why knowing how to play chess can make you a better thinker.

Mr. Ashley underlines the fact that nowadays many people are including their chess abilities in their resume since day by day more employers are starting to give advantage to the applicants who have tried competitive chess.

In the process of presenting the vast difference that chess can make in anyone’s career, Mr. Ashley is being reasonable and convincing. He is truly an inspiring speaker. By the end of the talk, he provides the ground rules and the basics of playing chess, so if you need to learn or revise some of them you might want to check the whole talk.

Mr. Ashley is famous for his experience in organizing chess events. In fact, his FIDE profile is registered to be of an event organizer as well.

In an interview with CB India, he has talked about the general issues in chess and the specific issues in making it popular.

First and foremost, he supports the stance that it is thoroughly realistic to increase the earnings of Grandmasters and adds that 2600+ rated chess Grandmasters not making a decent living out of chess is ridiculous.

To fathom out the money issues Mr. Ashley provides a particular lane. He is assured that convincing businesses that investing in chess works for them, is key just because all they need is money and whenever they stop earning it, they simply stop investing.

However, there are many people who enjoy investing in chess since they are a big fan of the game. You may think that these people will keep investing just for their affection, but Mr. Ashley’s experience with one of his friends taught him otherwise.

All the investments that Mr. Ashley has brought were used to organize chess events and the biggest of them was the Millionaire Chess Open With a $1,000,000 guaranteed prize fund (largest in history).

The first time it was from October 9-14, 2014 in Las Vegas, Nevada and had Wesley So as its premiere winner. In 2015, the prize of $100,000 was treasured by Hikaru Nakamura. As of today, the third and by far the last tournament was held in October 2016 in Atlantic City. The highest grant was $70,000 less this time and was claimed by Dariusz Świercz.

Nobody can help not admiring the endeavors of Mr. Ashley, who has been trying to make chess a money game like the other popular sports. After all these attempts it is huge grief that he has decided that he does not want to go back to organizing, calling it:

the most difficult thing you can do in chess.

Exploiting his giant experience of commentating in chess, which includes captioning the great game between Deep Blue and Garry Kasparov, currently, Mr. Ashley is working as a chess commentator in Today in Chess program.

Alongside with all of his occupations, Maurice is also a writer. He does not own a wide bibliography, but is an author of several chess textbooks that include vital techniques and curious chess puzzles.

He is the author of the bestseller Chess for Success: Using an Old Game to Build New Strengths in Children and Teens (2005).

In an interview with Chessbase India in 2018, he announced that he is working on a book that is going to be on a topic that has not been covered in chess. Nevertheless, as of 2019 nothing has come from the ground about his new book.

It is a unanimous opinion that Mr. Ashley has been one of truly the best chess public figures in our age.

The fact that in 2016 he had his name officially printed in the Hall of Fame of chess players in Saint Louis speaks alone about his legacy. The town of Brookhaven attached August 20 with Mr. Ashley’s name forever; now, they celebrate that day as Maurice Ashley day.

In these mixed up times, our society needs people who use their acquired heirloom to promulgate education for young people and motivate them. We can sincerely admit that Mr. Ashley is the one person who made thousands of adolescent enthusiasts believe in themselves and work hard…and not just in chess.