It is a well-known fact that 9 out of 16 World Chess Champions are on some level affiliated with the Russian School of Chess.

However, not many people are familiar with the man who planted the seeds of the greatest chess generation in history.

The last Mohican of Romantic Chess, Mikhail Chigorin, deserves mega credits for his sacred endeavors towards bringing up the most imposing powerhouse: Soviet Chess School.

Chigorin was born in 1850 in a small city near St. Petersburg oblast. At the age of 9, he had to live in an orphanage since both of his parents were dead. Indeed, these events struck Chigorin as a little child; nonetheless, for the chess world, it was a blessing in disguise.

At the orphanage, he met his German-language teacher August Schumann, who was a chess connoisseur and taught Mikhail how to play chess. Mr. Schumann could never imagine how drastically the talented kid was going to change the history of the game.

Chigorin established a new romantic epoch in the history of chess. Before Chigorin, Russian art of chess was not taken seriously on the international level. N. N. Grekov, the author of Chigorin’s biography, states that Alexander Petrov, the Urusov Brothers, and Carl Jaenisch were the fathers of the Russian Chess School and they so much paved the way for the great Mikhail Chigorin, who not only carried the name of his country to an unprecedented level but also implemented his visions about chess that turned out to be adequate to challenge the fierce authority of Steinitz.

The battle between these two “megaminds” was captivating everybody’s attention by the end of the 19th century. At that time Steinitz was deemed a mesmerizing theoretic and a chess literalist. It is a matter of fact that he carried the torch of establishing chess theories.

The first World Chess Champion achieved this avant-garde status in 1873, when he altered from all-out-attack method to a positional play. Steinitz received severe criticism for his move that went as far as calling him a coward. At the end of the game, the criticism was not thoroughly valid as most of his games finished with deadly attacks.

The ability of Steinitz to snatch the process of a chess game with so-called own principles stood firmly on a ground that had never been touched by anyone before. Nobody could ever think that a player from Russia was going to be the first one.

To clinch this position Chigorin came a long way. It all started back in 1875, 14 years before Chigorin would be able to challenge Steinitz. Szymon Winawer, a prominent Polish chess master, was in St. Petersburg to play against Ilya Shumov.

The master from the east ended up defeating Shumov, 5-2, but it was not the most influential thing he did in the capital of Russia. Archives tell us that Winawer got acquainted with Chigorin and realizing the potential he got, advised Mikhail to try his abilities in the international arena.

Three years later Chigorin got an invitation to participate in a tournament in Paris but was unable to redeem it. The world had to wait for another three years to meet the Russian genius.

Chigorin had his international debut in 1881, in Berlin.

Based on the buzz given by the local papers, Chigorin’s biographer N. N. Grekov asserted that Berliners were genuinely interested in the arrivals of Blackburne from Great Britain, Mason from the USA, and Chigorin from the Russian Empire. Mikhail Chigorin won 10.5/17 points and shared the 3rd and 4th spot with SzymonWinawer: the same guy, who gave him the idea of playing outside of Russia. 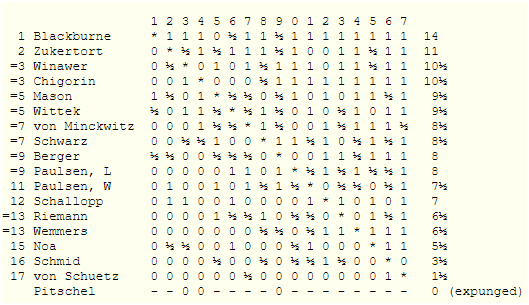 A year later, Chigorin succumbed to failure by getting 14/34 in Vienna. Even so, in 1883 he reimbursed his failure by triumphing in London. An extremely powerful squad was about to feature in London. In addition to all the players that played in Vienna, Samuel Rosenthal’s appearance made the tournament even more entertaining.

The organizers made sure that the spectators were going to stay addicted to following the matches. According to the policy, the first two draws were repealed, and only the third one was registered as a draw. Because of this rule, the tournament lasted for two months.

Chigorin treasured an immense honor by finishing the 4th in the tournament. His success immediately gained vast attention. Especially, his two wins against Steinitz were noteworthy. Experts could not stop talking about his energy and will towards winning.

For example, the Tournament Digest wrote, “Undoubtedly, after winning the 4th prize, a big future awaits for Chigorin. He still does not have the experience of Steinitz or Zukertort, but is attributed with the necessary energy to become a chess master; during thetournament, he continuously played for the win, and his persistence guaranteed him with success”.

Chigorin earned the name to challenge Wilhelm Steinitz in New York 1889 Chess Tournament after sharing the 1st spot with Hungarian chess master Max Weiss. The match was held in Havana, Cuba in the same year.

During those times, the World Champion had the privilege to choose his challenger. Steinitz elected Chigorin as his adversary after getting an offer from Havana’s chess club to play a match against the most deserved player.

This choice for the World Chess Championship Match received its genuine approval from chess authorities all over the world, the main reason being Chigorin’s prevail in New York.

The match was of 20 games and the timing was 15 moves in an hour. It started on January the 20th and ended on February the 24th.

The first part of the match was fairly successful for Chigorin as he took the lead three times. Later in the match, he started making blunders in winning positions that ultimately led to his meeting with Waterloo with a score of +6, -10, =1.

The openings of the match were incredibly diverse. In eight games, Chigorin preferred Evans Gambit using the White pieces, and in the other, he played Spanish. Steinitz, in his turn, started the rest of the games with 1. Nf3 move.

Chigorin did not take this move as threatening and was not preparing in-depth whatsoever, which made it slightly easier for Steinitz to exert his pragmatic ideas merged with theoretical knowledge. Even with his loss, Chigorin had the best performance against Steinitz since in 1886 Steinitz defeated Zukertort with a score of +10, -5, =5.

It is also crucial to note that Chigorin was not in-form. In Russia he had played several matches with Alappin and Schaefers; that was all. A fascinating observation that tells us about the capacious hindrances Russian chess players had to overcome.

Undoubtedly, talented people who also had an immeasurable love for the game never gave up. It is stuffed in the archives that Chigorin played correspondence chess in order to reimburse the lack of chess opportunities provided for Russian chess players. In fact, thanks to his endeavors the team of St. Petersburg managed to beat London’s chess team.

Chigorin lived his life being a chess ambassador and promulgating his aggressive style of chess. It is no wonder that the legendary Grandmaster died playing chess. In 1907 he was diagnosed with an incurable type of diabetes while participating in a tournament in Carlsbad (also known as Karlovy Vary).

A year later he died in the city of Lublin in Poland. In 1909, the president of St. Petersburg’s chess club, Peter Saburov, organized a memorial dedicated to the legacy of Mikhail Chigorin.

After being twisted in between different Russian cities, starting from 1993, the tournament’s venue returned to St. Petersburg. This year’s tournament will mark the memorial’s 110th anniversary.

Memorial, indeed, plays a substantial role in appreciating the legacy of Chigorin; nonetheless, it is an undeniable truth that Mikhail Chigorin’s career, writings, and theories served as an inspiration to discover the immense chess talent within the borders of Russia.

Corroboration of these words is depicted in the memoirs of the 6th World Chess Champion Mikhail Botvinnik:

The first chess book that I read was 'chess paper' written by Chigorin, 1876-77. Studying this journal did not do me less favor. Chigorin perfectly analyzed active openings. I mastered the annotations and played all the games in two months

To perceive the greatness of MikhailChigorin, it is important to assert that Botvinnik is just one genius among eight others that lived and prospered to resume Chigorin’s campaign.