The Succulent Enigma of Paul Dozsa

On January 12, 2009, a YouTube user named Russell Furman published a video of a man (whose name was claimed to be Paul Dozsa) being arrested in 1988.

As it turns out the community gave a stirring reaction leaving us to read comments, such as:

If I had this accent I'll never shut it

Swag is for boys, class is for men, democracy manifest is only for chosen ones

​Many people call this man the funniest public freak ever, not knowing that there is an actual mystery surrounding this incident. We have stockpiled what is needed to meticulously unravel the story behind this scarcely appearing surname.

Quick Navigation
Theory #1: It is Paul Dozsa
Theory #2: It is a politician named John Bartlett
Theory #3: It was a TV skit
Theory #4: It was another real diner and dasher

Perhaps one way to get to the bottom of this: where does the idea that this video is supposed to depict Paul Dozsa truly originate? Papers do not mention any details about the incident, except for giving an account of what happened. Here is the article from The Sydney Morning Herald published on November 24, 1988.

Sydney’s most famous restaurant runner, who has 54 convictions for failing to pay for meals, appeared in court once more yesterday. Paul Charles Dozsa, 48, unemployed and of no fixed address, was charged before the magistrate, Mr S. D. Hyde, in Central Local Court with failing to pay for a meal.

After being further charged with obtaining credit by deception, he was placed on a 12-month, $500 for good-behavior bond. The court was told that about 8 pm on Tuesday Dozsa went to the Arun Thai restaurant, in Elizabeth Bay Road. By 11 PM, just before the police were called, Dozsa had consumed $14.20 worth of food and $21.50 worth of alcohol.

When the owner of the restaurant, Mr Kham Signavong, presented the bill, Dozsa said he had no money and would return the next day to pay, the court was told. Kings Cross police who were called to the restaurant carried out a fruitless search of Dozsa’s wallet before arresting him.

What seems to appear in this article is a representation of a casual arrest of a strange convict and you would prefer to deduce that it is the recount of what is shown in the video. Now, let us have a deep look at the article.

It is claimed that the police were called just before 11 PM, but in the video the daylight is still visible; therefore, this news and the arrest on the video are not quite associated with each other.

The claim that it's supposed to be Dozsa (either live, or as a re-enactment) seems to originate with the YouTube video's title and although the claim is picked up and carried by the Daily Telegraph, Daily Mail, and Unilad, there simply is not a good source for it.

So, who is Paul Dozsa, if not the man in the video? From the article we have already seen that Dozsa is known as a dine dasher, but let us know more about the man. Dozsa was a chess grandmaster born in Szeged, the third-largest city of Hungary, in 1940 and immigrated to Australia in the mid-1960s.

The reason for his immigration is foggy. Dozsa has controversial memoirs about chip implants on human heads that outline he was a subject of military-scientific research. It is deeply described in the letter written by him. He signed the letter this way:

May God be with us all.

From the letter, we know that Paul Dozsa was a secret agent and, according to his words, an electronic device was implanted behind his left ear and affected his behavior. It is believed that he dined and dashed in 110 different restaurants, and his defendant used the statement presented above as an excuse to free his client (it seems he always represented himself in court).

While you are wondering if this is a plot of a science fiction movie, it might be better to shed light on some other bizarre incidents that included Paul Dozsa. Once upon a time in Brisbane, he stripped to his underwear in a French restaurant and offered his clothes as a payment for the meal.

Luckily, the manager courteously refused the offer. The other time, he asked the judge to free him from prison, so he would be able to play the National Chess Championship. Unfortunately, the judge broke the heart of this eccentric chess player.

Moreover, Dozsa was not a crazy individual only in courts and prisons; he was dragging attention to his chess board as well. Once he introduced himself to his chess opponent while being tipsy and took a short nap during the game.

All in all, Dozsa was a controversial figure, who has done many unprecedented actions as a human being. We will never know whether all these statements of his are valid or not as it is not a piece of a cake to extract information about his life; in fact, he used a number of fake names to the point that when he passed away, neither Crime Stoppers nor close friends believed he had actually died.

In order to collect enough evidence to confirm the death of Paul Dozsa we have searched for his chess games on chess-db and found out that his last publicly available game was played in 2002; an interesting coincidence that supports the fact that the chess player Dozsa has died in 2003. 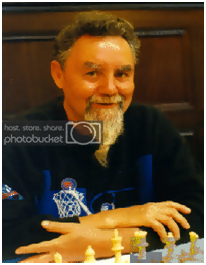 The main question remains stalling; who is the man in the video? Let us discuss some theories around this question:

Theory #1: It is Paul Dozsa

Although easily refuted, this theory is the most popular with the internet. The friends and the family of Paul Dozsa have announced that Paul had a distinct Hungarian accent, which he maintained until his death, while the man in the video uses a posh Australian accent.

Theory #2: It is a politician named John Bartlett

John Bartlett does look like the man in the video. A  Reddit user named Nalkarj helped us to delve into the depth of this theory.

Bartlett was born in England in 1949 (which would explain the posh nature of the actor's voice), he also didn't enter state politics until 1999 – more than 10 years after the footage was shot. His marriage was dissolved in the mid-80s, which could have influenced his personality and made him a misbalanced person.

Sadly, he passed away in 2008. The only fact we have here is that he looks like the man in the video, which, indeed, does not suffice to confirm this theory.

On a bizarrely related note, British comedian Simon Day confidently name-checked John Bartlett as the man in the video during his 2014 series The Life Of Rock With Brian Pern in which a fake charity single named 'Succulent Chinese Meal' is mentioned as one of the most popular of all time.

This theory has been widely revolved around in different hands. It certainly has a valid base to lean on. Where does this professional footage come from? The video is shot from 3 different angles, and we can undoubtedly say that in 1988 no casual pedestrian carried digital devices that could shoot videos of this quality.

It remains a mystery, but here are some scratches on this matter. The video includes explicit lines, such as “Get your hands off my penis” or “Are you waiting to receive my limp penis”. In the 80s it was not okay to use the word “penis” in primetime television.

It most probably became an acceptable thing on 10/15/1988, when Saturday Night Life aired the sketch “Nude Beach”, co-written by Conan O'Brien and Robert Smigel, in which the word “penis” was said out or sung at least 42 times. Here are the transcripts of that sketch. Besides, even if it was a TV reenactment no one can find the TV show or the actor; therefore, we cannot confirm this theory.

Theory #4: It was another real diner and dasher

Take a look at this Instagram video posted on June 16, 2019. We cannot help not feeling the identic voice with that of the arrested man on the 1988 footage let alone the looks.

Nonetheless, the man still remains anonymous and that is why we have searched for days in the archives of Sydney Morning Herald to find the daily coverage of the arrest. Here is what we have found: 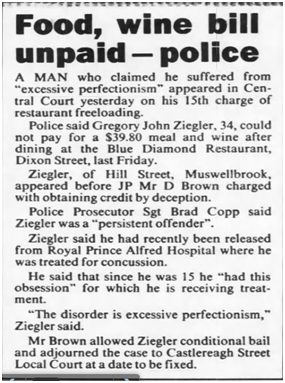 Referred to as “a man who claimed to suffer from excessive perfectionism”, it should remind us of something. Another interesting line on the headline is that the incident took place on Dixon Street in Sydney, which happens to be in Chinatown: the best place to enjoy your succulent Chinese meal. We have looked for more on the name John Ziegler. Here is another paper article: 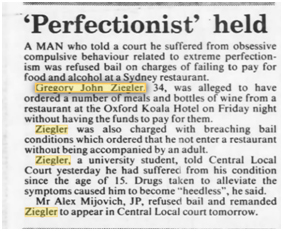 Gregory John Ziegler was a dine and dasher, and the descriptions of this man on the articles make us think that he is the real name hidden behind the viral video.

We have tried looking up this name in criminal records, going as far as checking the deed poll records, but there was nothing on this surname. Maybe John made sure that nobody would make his name popular, we will never know.